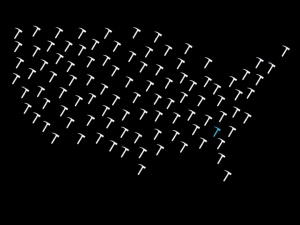 I’m sure most of you are wondering what this map of the United States of America is all about. You can see all the little rock hammers. But can you see the one little blue rock hammer inside? Well that lil blue rock hammer represents the 1% of all geoscientists that are black. That lil guy is BlackGeoscientists.

Here’s the raw data of what geosciences looks like based on data provided by the National Science Foundation (for those of you analytic-type people that like looking at data tables).

As for me, I’m a visual person that enjoys looking at maps. So, I’m going to break down that data table in the following maps.

This is what America looks like. In this map are 100 little rock hammers, therefore a single rock hammer represents 1%. The rock hammers have been scattered randomly over the US, and do not represent actual geographic locations of people. Please note that Others (including American Indians) are not represented on this map. Here we can see why people of color are referred to as minorities. But also notice there is a certain level of interconnectedness amongst those blue, green, and purple hammers. In most instances you wouldn’t have to jump more than one white hammer to reach a hammer of color. It may not be perfect, but this lil baby is ours. Our America.

Then we reach this map…

Our fairly colorful map has lost a lot of it’s color! And it’s lost almost all of it’s racial interconnectedness. What’s interesting about this map is this is what it actually felt like for me during my undergrad. I would see other people of color at conferences, but at my own home institution I was the only one. I always felt welcomed and included by my classmates and my professors. But no matter how deep the friendships were, I couldn’t shake this sense of alone-ness, of other-ness. I would walk the quad of my university and see scores of people that looked just like me, and then I would walk into my geology classes and I was an alien. Maybe an alien like Alf, loved by most, but still an alien.

Me during my undergrad. A friendly lovable alien.

But this is where it gets interesting…Who get’s employed in the geosciences?

Welp…It’s clear someway somehow those few hispanic and black students that were awarded a bachelors degree in geosciences don’t go on to employment. Do they switch careers? Or is it they can’t find employment with their geoscience degree? This is where geography is an important part of the story. I won’t be discussing that in this blog post but I will cover it later, I promise. Just know for now, that there is a huge discrepancy between where students of color are awarded their degrees in geosciences and where the actual jobs are. Please note that there is an overrepresentation of White and Asian geoscientists that are employed.

And this map is what geoscience feels like to most black people.

We’re back to our original infographic. If you were paying attention I just said this “is what geoscience feels like to most black people.” Not most black geoscientists, but most black people. Whether they’re a chef, teacher, writer, nurse, lawyer, or actor there is a widely held (unspoken) belief that geology isn’t for black people. And unfortunately, the statistics turn that belief into a fact.

The BlackGeoscientist problem isn’t as simple as a leaky pipeline. To a lot of people of color, the pipe seems to be capped with a semi-permeable membrane, one in which they were never meant to go through. Geoscience has to change it’s image and tackle the underlying belief system if anything is going to change.

This is not the image geoscience should want in any community.

[PS: I have updated the last two infographics with the correct references, and added the clickable reference links below]

Also if you aren’t aware, NSF provides awesome data tables on Women, Minorities, and Persons with Disabilities in Science and Engineering. They also put out a Digest that summarizes a lot of the data and provides some great graphics as well.

6 thoughts on “Geosciences in the United States: The Stats”